Skip to main content and our Accessibility Statement may be found in the footer of our website.
Back To Orthopedic Stories Many years ago, Joel Frey struck up a conversation with a woman from Houston during a family vacation in Cancun, Mexico. The two had a commonplace in the fact that they both had knee problems. She told Joel about her recent knee replacement surgery and how it didn’t hurt at all. When Joel returned home he immediately started doing research and came across the Makoplasty procedure.

Joel found that his knee pain was holding him back from living his life to the fullest. “My knees hurt from the inside out,” says Joel. “I asked my primary care doctor to find me a physician in Memphis that specialized in Makoplasty and he referred me to Dr. Simard.”

Dr. Jean Simard, orthopedic surgeon at Saint Francis Hospital-Memphis, performed the Makoplasty procedure on both of Joel’s knees a little over one month ago. “The day after surgery they had me up walking,” says Joel. “At that point, my knees didn’t hurt any worse than they did before the surgery.” Since the surgery, Joel has been able to stop taking medication for the arthritis pain in his knees.

Joel has been doing physical therapy three days a week and is finding it is really helping him feel better, faster. “They are making me do things I wouldn’t normally think to do,” he says. “I’ve found that the thing that limbers me up the most is riding the exercise bike. After two or three minutes, my legs feel great!”

The surgery has given Joel and his wife a new outlook on life, “We’re going to Mexico in June for a family vacation and so many times in the past I have missed out on activities because of my knees,” Joel says. “I’m going to climb a pyramid. A bigger one than I ever have before because now I can.” His wife is so pleased with his results that she is considering having the surgery.

Joel is grateful to the Dr. Simard and his staff for giving him a better quality of life. “The staff was great and the whole process went as smooth as can be,” says Joel. “I would recommend Dr. Simard to anyone!” 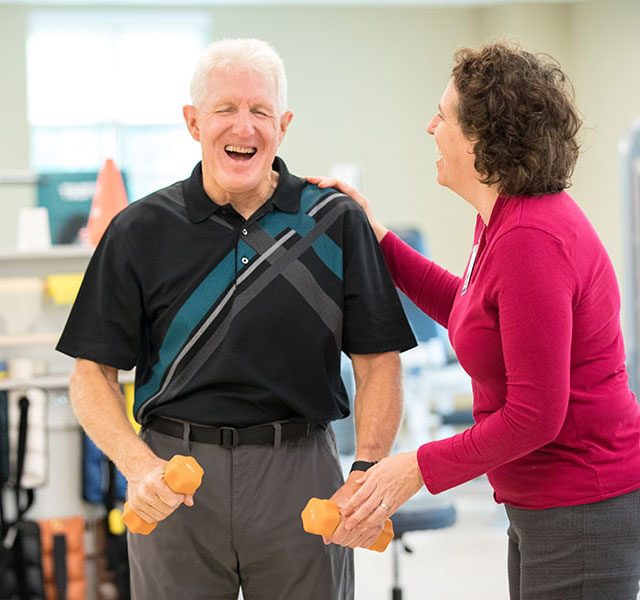